War broke out in heaven;
Michael and his angels battled against the dragon.
The dragon and its angels fought back,
but they did not prevail
and there was no longer any place for them in heaven.
The huge dragon, the ancient serpent,
who is called the Devil and Satan,
who deceived the whole world,
was thrown down to earth,
and its angels were thrown down with it.

Then I heard a loud voice in heaven say:
“Now have salvation and power come,
and the Kingdom of our God
and the authority of his Anointed.
For the accuser of our brothers is cast out,
who accuses them before our God day and night.
They conquered him by the Blood of the Lamb
and by the word of their testimony;
love for life did not deter them from death.
Therefore, rejoice, you heavens,
and you who dwell in them.”

Saint Michael the Archangel,
defend us in battle;
be our protection against the wickedness and snares of the devil.
May God rebuke him, we humbly pray:
and do thou, O Prince of the heavenly host,
by the power of God,
thrust into hell Satan and all the evil spirits
who prowl about the world seeking the ruin of souls.
Amen 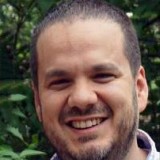 Michael loves his God, wife, 3 sons, family & friends, reading, music, & his garden. He's a music director at Holy Family Catholic Church. By day, he is a Sr. Consultant at Omniture, an Adobe company.